As soon as the Starlink Maritime system was announced we ordered one through our USA office and shipped it to Europe.  We have then been evaluating it with one of our clients.  After organising the delivery, setting up the account with Starlink, activating and providing installation guidance after our setup and test in Mallorca, the crew completed a fixed installation on their yacht in the east Med with both panels operating in both the configuration options.  So firstly, the systems worked in the Balearics and in Greece. 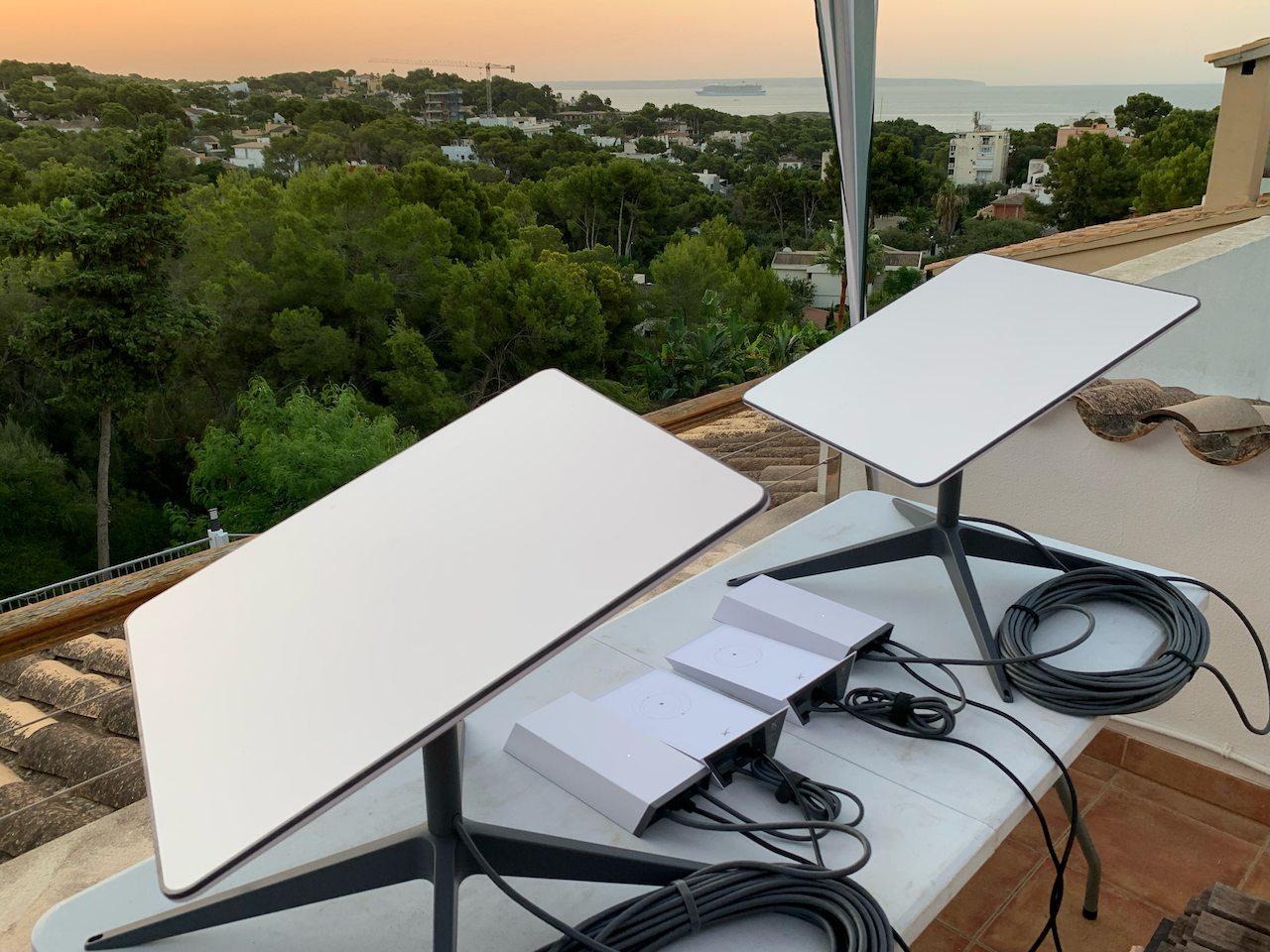 We and the yacht are now both monitoring and evaluating the performance and outages under all conditions. The installation only took 4.5 hours! It is up and running with 250 Mbps down and 18 Mbps up with between 60 – 100ms latency.

Switching and Integration into the IT System on-board

On every yacht there are bound to be losses in the IT infrastructure, which in this case initially reduced the inboard performance to 90 Mbps.  The networks on most, ten plus year old yachts, have been grown organically and have often never been updated. There are many ways to improve the performance, one of which we and the crew implemented, and the owner is now receiving 250Mbps down and 27Mbps up on his iPhone, when connecting by Wi-Fi on his unrestricted LAN. 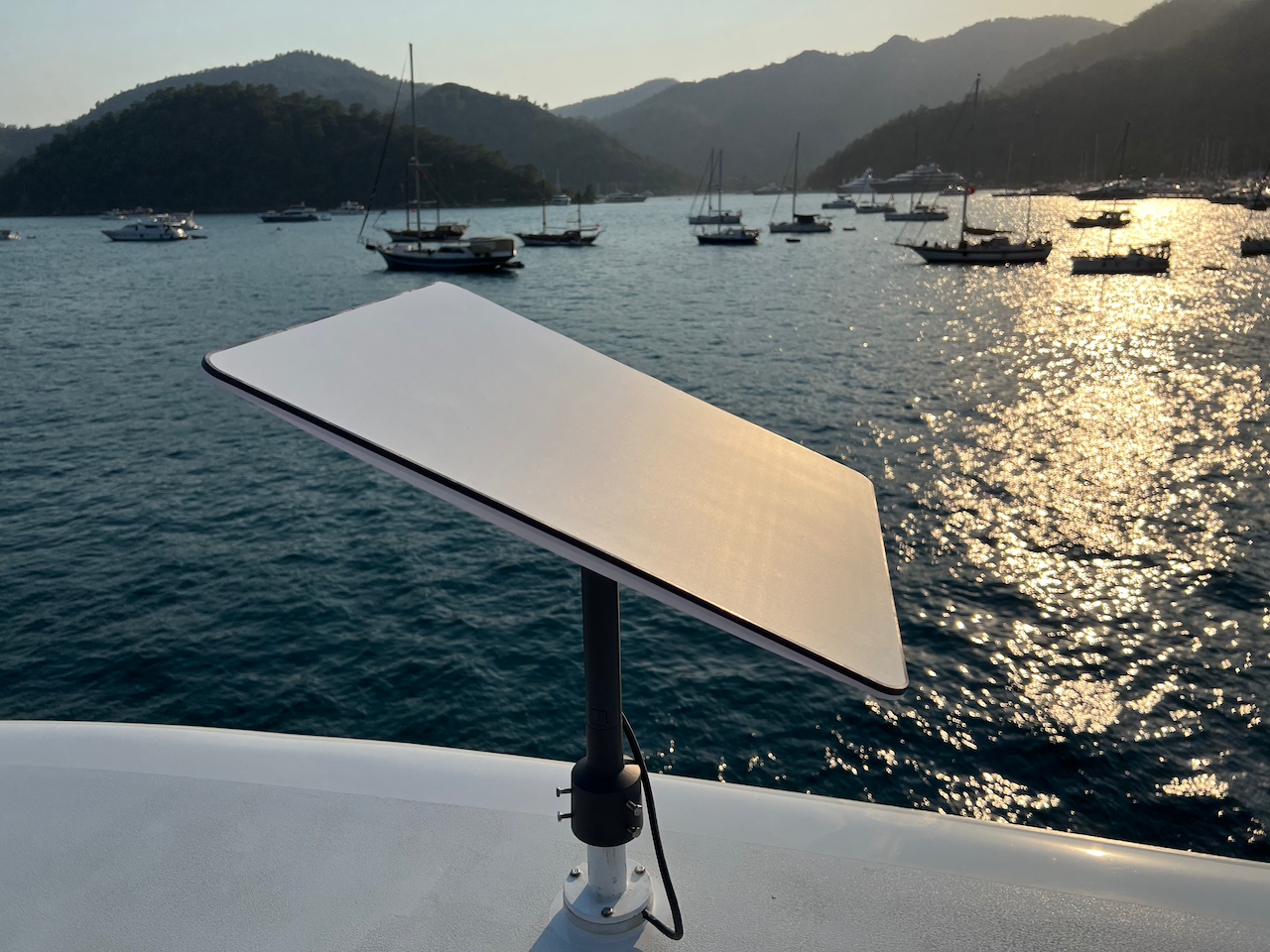 With this level of bandwidth available the yacht will become more vulnerable to cyber-attack.  With more bandwidth there will be more IP addresses, more exposure and typically, there will be no asset management of IP addresses.  This will be a new environment that the bandwidth enables with a significant increase in M2M connections with devices talking to each other. We are addressing this as a new monthly cyber service which I will explain in the next issue, or before then contact us. Search on LinkedIn for a post by Richard Hodder referencing a recent article from Wired about the first Starlink hacks!

The Risks of being an Early Adopter

At e3 we have always been innovating and launching new technology.  As a result, we know there are always potential issues and we recommend a conventional backup, particularly when you have the owner or charter guests on-board.  In this case our client is primarily using our 4G/5G pay as you go service as a backup as if there is an issue then you only pay for it when needed.  They also have their conventional VSAT which has been reduced to its base rate for now and will probably be suspended if all goes well.

The Antennas, Equipment and App

The antenna is the weak link as it is only IP56 and will be vulnerable in a gale. They have motors in them, so they do move, but very slowly after a good five-minute wait, when nothing seems to be happening! The cables and connectors are all good quality, but they are of various fixed lengths.  All available from the Starlink Shop. There is a power supply and a wi-fi router for each antenna and both need power.  The configuration is done using the app connecting via the wi-fi to the router.  The app also provides live feedback on the Network Uptime, Latency and Usage on-board from anywhere in the world.

Various people have asked if they could install the antenna in an unused VSAT dome and yes, you can. There will be a small loss, but domes are designed to have minimum RF losses.

We look forward to testing the new Starlink maritime antenna in Q422.   Starlink will be providing this new antenna free of charge to existing Maritime clients.

We have tested the Starlink Support Service twice and again it’s via the App.  You ask a question, and they confirm they have received it quite quickly, saying they will get back to you and then, both times, they reply about 24 hours later. Not such a good response time if the system is down.  Also, you won’t be able to use the App so make sure you have a backup!  I hope the response time doesn’t degrade as it gets busier.  They would not offer any suggestions as to how to integrate it into the yacht’s network.

The yacht will still need support from their Systems Integrator which is a service we offer.

There has been nothing quite as detailed as Starlink happening in the other constellations this last month, but we have learned that Kymeta will be beta testing with the OneWeb LEO service at the end of November this year, with the intention of a full market release in February or March next year.  We know the Kymeta panel is a proven maritime panel, and we are told the bandwidth will be 195Mbps down and 16 or 32 Mbps up per panel at an equivalent price point to Starlink.  However, there will be a data cap per month.

We will provide a further update in a few weeks.