The future of satellite communications 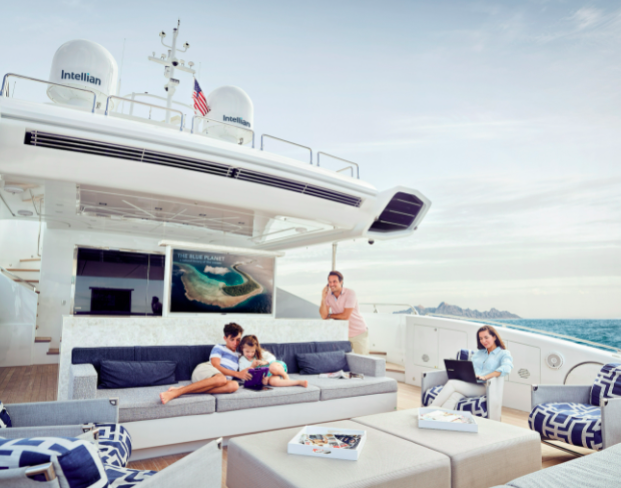 Jon Harrison, Vice President and General Manager at Intellian, believes a revolution in satellite communication is imminent. Here’s why:

Ask any historian, and they will tell you that the key to talking about the future is to understand the past. For satellite communications, that past stretches back to the 1940s, when Arthur C Clarke spoke of ‘extra-terrestrial relays’ and the idea of the geostationary (GEO) satellite was posited. Since then, satellite communications have progressed rapidly, with milestone achievements at approximately 20-year intervals. The first commercial GEO launch took place in 1965. The first maritime VSAT terminal was deployed in 1986. The 1m terminal became an industry standard in 2006, with Comsys reporting installation of 3,800 units and exponential growth.

Today, we’re fast approaching the next 20-year milestone. The intervening years have been characterised by rapid growth in the number of connected vessels, and several new satellite network operators have joined the market. But while adoption rates have been high, so has the growth of technologies which use VSAT and the expectations of VSAT subscribers. Just as the rise of 4G and 5G cell phone networks has led to the requirement that land-based mobile connectivity should be on par with that in the home or office, so yacht owners and crew now expect seamless, high bandwidth data whether tied to the dock or hundreds of miles offshore, anywhere in the world.

Meeting this expectation places high demands on satellite provision and has resulted in significant investment in new and existing networks, and in several new satellite launches. While the capacity required for everyday office applications is comparatively small, entertainment and the expectations of our social media-driven, ‘always on’ society are pushing the boundaries of current infrastructure on a daily basis. Gaming, video streaming, 8K TV, onboard cinema, socialising and entertaining all demand significant bandwidth, and on board a superyacht these facilities need be able to extend to the owner and multiple guests, without affecting the level of service or speed experienced.

One of the key challenges in servicing these requirements is latency: the delay between a request for data and a response being received or, in voice and video call terms, the perceived lag between two parties in a dialogue. For passive client applications such as browsing the web, longer latencies are barely noticeable, but for services requiring constant two-way communication – which includes gaming – latency can be infuriating. This is one of the major drivers in interest in novel types of satellite data networks, which have the potential to slash wait times whilst also providing truly global coverage: low-earth orbit (LEO) and medium-earth orbit (MEO).

By launching satellites into lower orbits, the round-trip distance the signal travels is cut from nearly 72,000km for a GEO satellite to less than 4,000km for LEO.  In turn, the latency is reduced by a factor of 15, to around 40 milliseconds. To the user, a time this short is imperceptible, resulting in a home-from-home online experience.

While LEO networks are not new – they have existed for limited data and voice usage since 1998 –the concept of using them for high capacity data is wholly 21st century. Using VSAT technology onboard LEO satellites will make possible instant, high bandwidth communications anywhere in the world; it is for this reason that LEO VSAT networks are being actively researched and, in some cases, developed by many well-known tech brands not previously associated with the satcoms market, such as Amazon, Facebook and Google.

There’s no point pretending that corporations such as this have a deep interest in the maritime market, but with the saturation of current infrastructure likely to restrict bandwidth-hungry initiatives in future, launching LEO satellites is a comparatively inexpensive way for companies such as these to boost capacity for their services on land – especially now that reusable launch vehicles are slashing the cost of delivering satellites into orbit. Once launched, the global nature of a LEO network then means that the same service will be available at sea as to its shore-based target customers, with worldwide coverage right the way to the poles, with no black spots.

While building and launching LEO satellites is cheap compared with GEO, operating a LEO network poses challenges for both the service provider and the terminal equipment manufacturer. LEO satellites are constantly in motion relative to an observer on Earth: an orbital velocity of around 27,000km/h means that a satellite is only in view for about seven minutes. To provide unbroken service then, many satellites are needed (a well-known existing LEO network operates a constellation of 76 active satellites); a satellite which is about to dip below the horizon must hand over its connections to other, still visible satellites; and the terminal equipment must be able to track these fast-moving objects.

Here at Intellian we are committed to making our connectivity solutions future-proof, and our terminals are ready to support new networks. Our innovative NX Series antennas, in anticipation of the rise of LEO and MEO networks, are equally adept at tracking fast-moving satellites in low orbits as they are at maintaining lock on a geostationary satellite. They are also easy to convert between the Ku and Ka frequency bands currently used to deliver VSAT services. Installation is simple thanks to our single-cable, dome-on connection, while commissioning and remote support are straightforward owing to our user-friendly AptusNX web-based interface.

With sizes from 85cm to 150cm, there is an NX VSAT terminal for almost every yacht, while the largest superyachts are served by the v240M and v240MT terminals, which track all orbits and automatically switch between C, Ku and – in the case of the v240MT – Ka bands. With support for multiple bands and orbits on all leading Intellian terminals, we are confident that our products are ready for current and upcoming VSAT services for the foreseeable future. Intellian’s leading satellite TV antennas are also available with domes to match the NX Series antennas, enabling superyachts to maintain a continuous aesthetic on deck.

At the beginning of this article, we discussed the 20-year milestones of development in satellite communication. At Intellian, we firmly believe that the next milestone is the proliferation of new networks in new orbits, revolutionising communications both on land and at sea by supplying undreamed-of levels of inexpensive, global bandwidth. The reality of the communications on board your yacht being as good as those in your home or office is only just around the corner, and we’re ready for it.

Read this article and many more in the Superyacht Technology Blueprint.