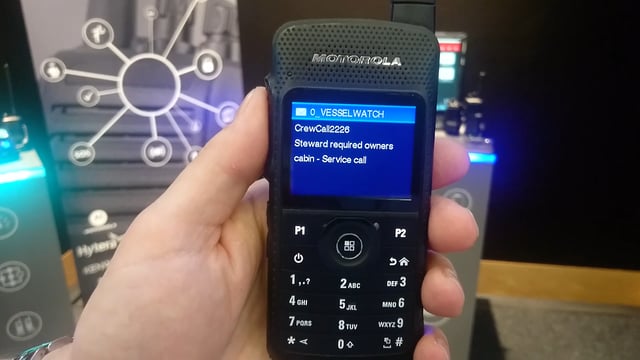 Wynn Las Vegas announced that it will be putting the Amazon Echo in all 4,748 of its hotel rooms by summer of 2017.

Enhancing the Guest Experience through technology is a real and effective point in marine applications. Major manufacturers like Apple and Amazon are succeeding in blurring the lines between humans and technology. The challenge is to find ways to bring these technologies into the luxury marine market to make a positive impact on guests and crew alike, something that Net-Logic Marine is very familiar with.

The guests need to be given the experience that they have come to expect from the industry – and importantly, that they are paying for. In superyachts, stewards are expected to give great service around the clock for both owners and guests through hard work and commitment.

Therefore, R & D companies such as Net-Logic Marine look to give simple ways to call, order and communicate with crew. With over 18 years of experience in the luxury marine industry, Net-Logic Marine has the knowledge to fully understand and service those needs with a team of experts in communications, designing, and engineering.

Speed of response and ensuring the guest is not swamped by crew answering the same call are key features of radio solutions like the VesselWatch Two Way.  VesselWatch connects to the vessels existing solutions from CST and MING call buttons to Crestron, AMX and Contol4 AV solutions and allow the crew to get an instant notification to their digital two-way radio.

Matt Wright, the CEO of Net-Logic Marine, states that “the importance of giving the guest feedback when a crew member accepts the call cannot be overlooked.  We take this a step further by informing the guest which member of the team has accepted and letting the rest of the team know that the request is being handled”.

Last year at METS, Net-Logic Marine displayed their Apple i-Watch application which provided users with the ability to order food and drink from their watch and notify the crew via their two-way radios.  This year, they are looking to see how the Amazon Echo can be used to order champagne from the hot tub or to request a snack whilst relaxing in the lounge area.

“We saw the trend in high end hotels.  Hotels like the Wynn Las Vegas announced that it will be putting the Amazon Echo in all 4,748 of its hotel rooms by summer of 2017.  We could see that people enjoyed communicating with the Echo and surprisingly 250,000 have reportedly proposed to the Echo since launch.  The challenge to the development team is could this be added to our VesselWatch solution.  The answer was a resounding ‘Yes’”, Matt comments.

The team prototyped a unique guest services skill and worked on humanistic responses to the request for things like fish and chips or an extra blanket. “We will continue to look to technology like the Echo as we realise the value of a happy guest to the vessel and the crew who provide an excellent service”, says Matt.