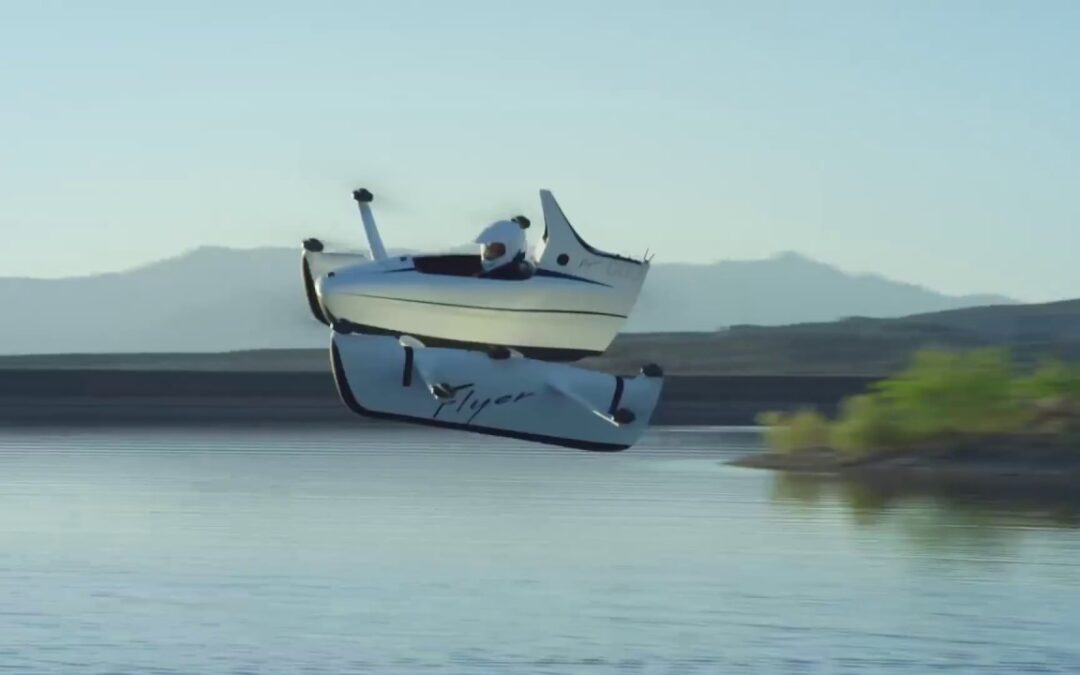 The Kitty Hawk Flyer is your own personal electric aircraft

A year ago, we got our first look at Google founder Larry Page’s secretive “flying car” project, Kitty Hawk: an all-electric hover-bike designed to be flown specifically over water. This week, the company unveiled an updated version of its recreational aircraft, the Flyer. And it’s quite the improvement over the original concept.

The Flyer weighs 250 pounds and sports 10 battery-powered propellors and two joysticks. It looks sort of like bobsled mounted on a couple of pontoons surrounded by a bunch of drone rotors — so, you know, totally safe I’m sure. It’s not intended for soaring through the clouds like you’re George Jetson, with a maximum elevation is 10 feet and a top speed (limited by the flight control system) of 20 mph. Kitty Hawk has kept the pontoons for water landings, but gotten rid of the protective netting from the original prototype.

AN IMPROVEMENT OVER THE ORIGINAL CONCEPT

The company won’t say when the Flyer goes on sale, what the final price will be, or whether they’ve received any orders yet. Those who want to join the Founders Series can fill out an online form and join a waiting list. One of the questions is where potential customers intend to fly the aircraft if they get one.

Another sign that Kitty Hawk is in full-on marketing mode: it invited popular YouTuber Casey Neistat to visit its test facility in Nevada. Neistat sat through two hours of training before he was allowed to fly one of the vehicles (which he said he would do in a subsequent video). Two hours seems to conflict with Kitty Hawk’s original promise last year that potential customers could learn to fly “in minutes,” but honestly the more training the better when it comes to defying the laws of gravity.

The Flyer isn’t Kitty Hawk’s only product. It’s also working on the Cora, a two-seater electric aircraft with 13 rotors that can take off and land vertically and is designed for an air taxi service. The company recently struck a deal with the government of New Zealand to test autonomous air taxis for official certification in the country.

At least 19 other companies are developing aerial taxi plans. These include legacy aircraft manufacturers like Boeing and Airbus, and ride-hailing giants like Uber. That company recently held its second annual Elevate conference and has made significant strides in partnering with a handful of aircraft manufacturers, real estate firms, and regulators to better its chances of developing a fully functional, on-demand flying taxi service.

Flying cars still faces significant hurdles. Experts suggest that engineering and regulatory hindrances may prevent electric vertical take-off and landing aircraft from ever taking off in a meaningful way. Simply put, there are no electric-powered aircraft, or even gas-electric hybrid aircraft, in commercial operation today. Flying requires an incredible amount of energy, and present battery technology just doesn’t offer the power-to-weight ratio needed to achieve liftoff. Most experts predict that it will be years, if not decades, before the technology catches up.

An experimental aircraft powered by electric motors crashed in Hungary recently, killing its pilot and passenger. Siemens, the German manufacturer that built the motors, is investigating the cause. The single-engined Magnus eFusion aircraft crashed shortly after take-off at an airfield near Budapest on May 31st.