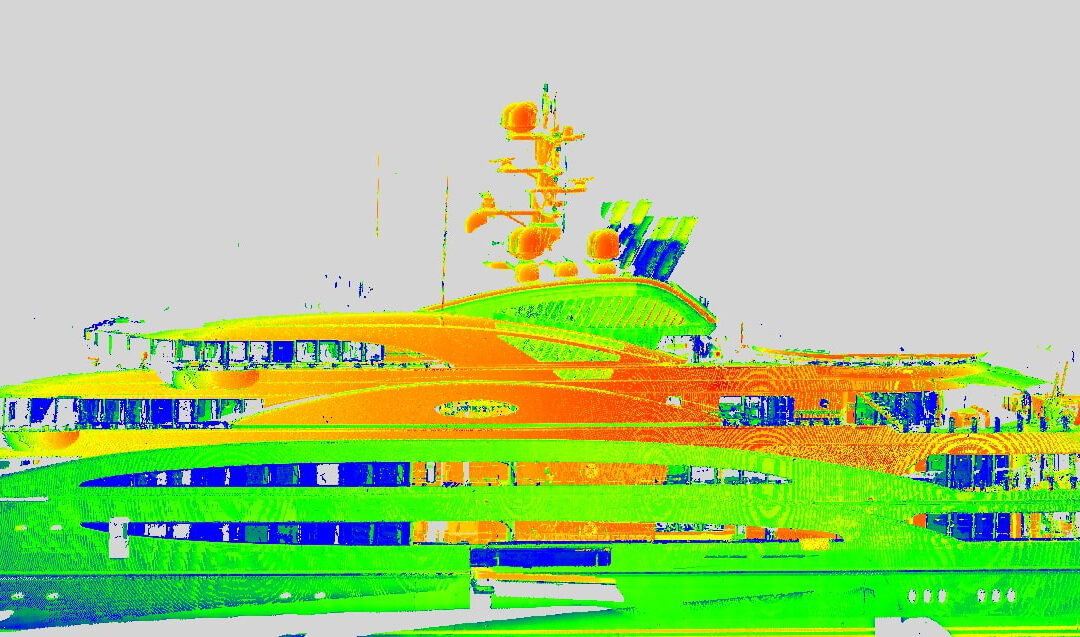 Spain’s BYD Group recently passed a milestone with its 200th laser scan of a yacht. The 73m Lürssen Coral Ocean has just undergone a detailed exterior scan, prior to extensive refit work. It follows hot on the heels of a full interior and exterior scan for the 45m luxury motor yacht Andrea, and means that more than 2,500m of hull length has now been scanned by the firm.

From Barcelona to the Balearics, the yacht design group is known for its high-tech approach and has been a leader in the field of accurate 3D scanning for more than 15 years. From checking that the hulls of sailing boats are fair to mapping the VIP cabin of a large motor yacht prior to refit, the technology has a thousand possible uses.

BYD invested in laser scanning back in 2004, and it can now deploy three devices for the task. There are two long-range Faro Focus scanners capable of accuracy down to 1mm from as far away as 330m. This small device is able to measure nearly a million points every second. There is also a detailed Go! Spark scanner, accurate to an astonishing 0.05mm.

Using these two tools, the highly skilled team at BYD has scanned some of the world’s most prestigious boats. In 2019, they mapped the entire J-Class fleet for rating purposes, including the incomparable Velsheda, which belongs to a repeat client. A few years earlier, she had had a similar scan in order to fair her steel hull for better symmetry. The accuracy of BYD’s scanning was also key in designing an extension to the hull of carbon racing machine Jethou.

“We perform around 20 different scans from different positions, each of which acquires some 10.9 million points,” explained BYD naval architect Tià Simó. “After processing, optimising and deleting non-usable data, as well as redundant points created by the cradle or the rigging, the hull of a 40m sailing yacht such as Velsheda results in around 10 million points.”

There are just as many applications on the motor yacht side, with major clients including 74m luxury cruiser Cocoa Bean and 47.5m Feadship Nostalgia. In both these cases, the aim was to precisely measure the dimensions of a specific area of the boat ahead of refit work. On Cocoa Bean, it was around the funnels and the forward front face of the superstructure for a new sundeck Jacuzzi, while the transom scan for Nostalgia was preparatory to extending the yacht.

“3D scanning is a hugely skilled job, with very precise setup required for accurate results,” continued Simó. “The equipment is portable, so the scan can be carried out wherever the boat lies, but the biggest investment comes back in the office, after the scan. Post-processing is critical to obtaining a precise image and must be done by a professional.”

Scan times vary from a quick 30 minutes for a 1m-diameter propeller, to about eight hours for the full hull of a 40m yacht. An interior cabin can be accurately mapped in about 45 minutes. The only limit to the size of an object to be scanned is the 330m range of the long-range laser.

Bravo Yacht Design Group or BYD Group (previously known as Barcelona Yacht Design Group) was founded in 2004 and is managed by Tià Simó and Raúl Gonzalo. Based in the Spanish yachting hubs of Barcelona and Palma de Mallorca, it offers a complete design and naval architecture service for new construction as well as refits, working in partnership with yacht builders or directly with yacht owners themselves.

BYD Group has an international network of partners and, after almost two decades of continually expanding operation, it has truly earned its place as a trusted name in the yachting community. It works on the full spectrum of vessels, from smaller watercraft to superyachts, both sailing yachts and motoryachts, and has a number of international awards to its name.

Cover image is a scan of M/Y Serene