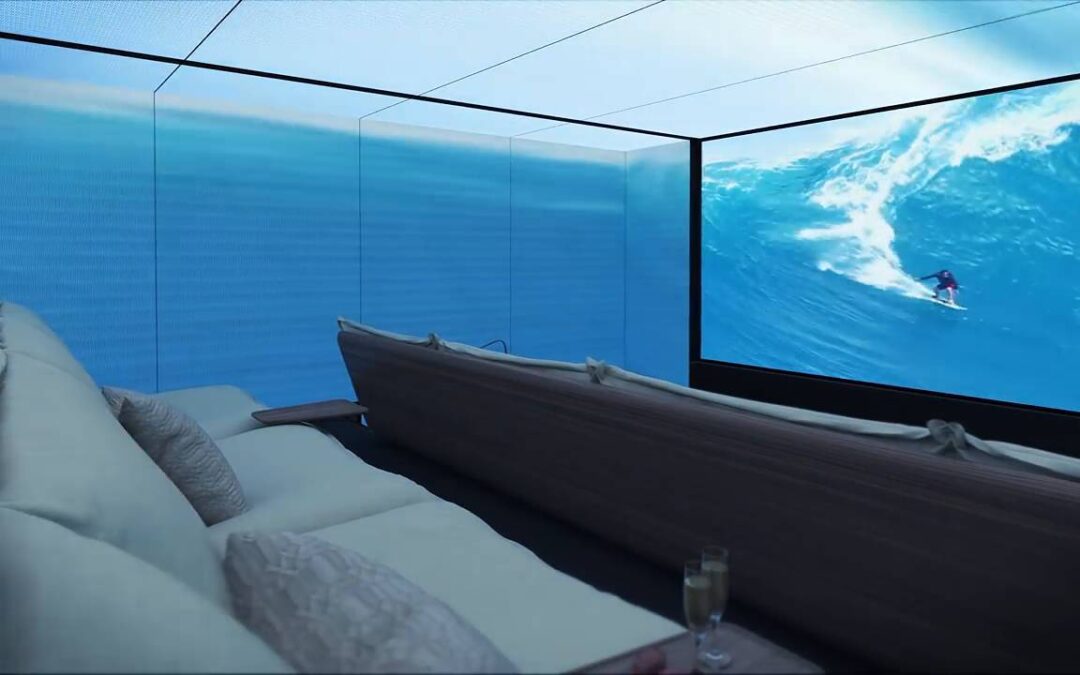 Genesis first premiered the innovative concept at Superyacht Design Week in London this summer, calling it “a fresh and new approach to immersive cinema design, that to our knowledge has never been done before”. CE Pro Europe spoke exclusively to Torsten Steinbrecher, CEO GMD and general manager, Genesis Technologies AG for all the details on the brand new cinema concept. “The idea came up initially at the Superyacht Interior Conference last year June in Hamburg where VGD and GMD had a conversation at the conference,” explains Torsten.“In December 2015, we decided to take it to the next level. The idea became more of a reality after a very exclusive presentation of the first DCI enabled ‘Day and Date’ home theatre for a ‘regular’ consumer, which was installed in a Swiss chalet in January.”This led VGD to create the unique interior concept, while the Genesis team got to work by planning the sound and system design for the high-end theatre.“The Lumière is a next generation private theatre; it is an additional dimension in entertainment and luxury,” Torsten enthuses. “It can be custom made for every scenario any owner could ever wish for.”

What’s Inside ‘The Lumière’?

Well known for its high end home theatre installs for the likes of Michael Bay and Jerry Bruckheimer – not to mention the first ever private day and date home cinema install – Barco Residential is jumping aboard the superyacht market with the launch of The Lumière. Barco is the project’s projection partner: every DCI compliant Barco Residential unit can be used within the cinema.

Specifically, Genesis can install Barco Residential’s Athena, Zeus, Prometheus I and II, and Thor projectors into a Lumière theatre.

“Barco residential is proud to be part of this project with our partners,” comments Tim Sinnaeve, managing director for high-end residential at Barco. “It’s a prime example of our commitment to performance and innovative architectural video applications creating unique experiences for our customers.”

In addition to Barco DCI compliant projectors, Bel Air Cinema’s ‘Day & Date’ service is included in any ‘The Lumière’ theatre, as is Philips Lighting’s LightVibes immersive media and lighting system that can be seen on the walls and ceiling.

Philips’ LightVibes plays a central role in the creation of the theatre due to its innovative ambient LED lighting technology that is synced to on-screen content, facilitating a fully immersive movie-going experience.

In collaboration with Disney Music Group, Philips Lighting launched LightVibes in the US in February this year, presenting the solution as a unique visual media system designed to deliver compelling ambient video and surround lighting effects to every viewer’s peripheral field of vision.

“The Philips LightVibes technology is basically a patented, LED wall technology,” Torsten elaborates. “Philips’ DSPs power the RGB LEDs individually to reproduce the effect on walls and on the ceiling. Genesis used Philips’ LightVibes and turned them into acoustically transparent modules to create the ultimate immersive experience.”

The content can be seen working to great effect with LightVibes in the above video; but what happens when the viewer wants to watch a normal movie, rather than a landscape-type scene?

“Basically, all content can be watched,” Torsten asserts. “Some DCI content (such as movies and concerts) are scripted by Philips already in cooperation with Hollywood studios, or alternatively content for walls and ceilings can be generated by using a patented interpolation algorithm. Of course, any content can be scripted according to the owner’s expectations,” he clarifies.

3D audio is thoroughly taken care of, with the theatre supporting Dolby Atmos, DTS:X and Auro-3D. The theatre features a Dolby Atmos 9.1.4 speaker set up made up of 17 JBL Synthesis speakers (including subs).

Besides Barco, Genesis is working with a handful of key partners such as Bel Air Cinema, and Deutsche Werkstätten Hellerau for the interior work – although every theatre can be tailored to the owner’s expectations.

Don’t have a private boat? No problem, as Genesis is keen to stress that ‘The Lumière’ is not just for superyachts. “Like every solution proffered by Genesis, it can be enjoyed on your yacht, as well as in your home,” says Torsten.

“The Lumière is unique, and we are the first bringing it to the residential, private aviation and marine markets,” he furthers. “The concept is very complex – we are integrating 3D sound in the highest possible quality and volume level into the RGB LED structure. Plus as we know, space is very limited in private theatres. It takes a lot of experience, engineering power and resources to create such an experience. It’s all about partnership and working hand in hand to create amazing experiences. Like every building process, there will be complications, but this is not unusual.”

Genesis Marine Division is the only company that is able to design and deliver such a system, in cooperation with its industrial partners. Though this concept was primarily developed for superyachts, it can also be installed into jets and residences – executed by a very limited number of trusted GMD integrators.

‘The Lumière’ is ready to install now and can be ordered from the Genesis Marine Division at a cost of approximately €2.2 million, (depending on the expectations of the future owner).

“It has been engineered to the last detail and it is ready to install,” Torsten confirms. “We have had very interesting talks with owner representatives and shipyards at MYS 2016 already.”