Making the unknown known: What is the new mapping software making navigating through unchartered waters safer? 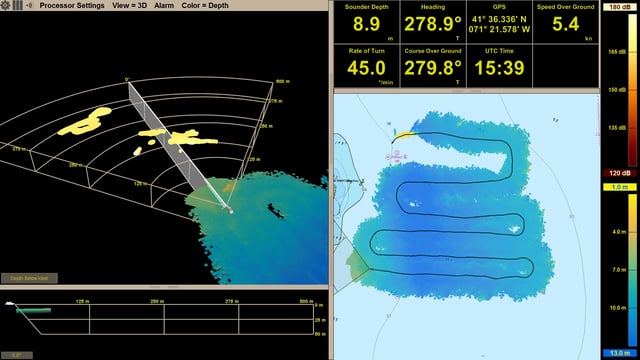 In the great depths of our oceans, obstacles are constantly changing and difficult to avoid. This makes anchoring in unknown waters dangerous, with vessels often having no way of knowing whether they are next to or drifting towards hazards. However, recent investments into a database for the storage and integration of a boat’s bathymetric survey datasets means this experience could now be a lot safer. The software application stemming from this, named Local History Mapping™ (LHM), has recently been brought to market by navigation expert FarSounder. Below, we explore the extent to which this software is needed in the superyacht industry, and get acquainted with the inner workings of the product.

Poor charting is a worldwide issue

In the US, with millions of nautical miles of water along the US coast and in the Great Lakes, large swathes of coastal area are often left unchartered for years on end. However, poor charting is an issue faced all around the world. Not only is it seen as an expensive and time-consuming task, but it can sometimes seem pointless with weather and natural disasters meaning obstacles are ever-changing.?This leaves many coastal areas with incorrect charting, even if they have had a recent update. Over the coming years, melting glaciers will produce more and more ice hazards, storms and earthquakes, which will continue to cause dramatic bathymetric changes.

Initial and subsequent bathymetric surveys are vital for vessels operating in areas with poor or no chart coverage. The risk of grounding is a real possibility in unchartered waters. For example, in 2004 the tanker British Enterprise ran aground near Anchorage, Alaska. The charts had shown it was clear to proceed, but they hit a shoal that had simply not been recorded. When they moved over the area they found themselves in depths of a little over 6m.

After a natural disaster such as a hurricane or earthquake, waterways become filled with debris from broken and lost vessels and equipment, as well as many other obstacles. Bathymetric changes are likely, but are unable to be seen or predicted. For superyachts responding to crisis situations, such as the recent humanitarian mission delivered by M/Y Dorothea III in Grand Turk as part of YachtAid Global’s relief project, these potential unknown obstructions increase the danger of the mission.

How does LHM work?

The software is based on a purpose-built bathymetric survey engine. This map is updated with every ping and is displayed as an overlay on top of the electronic nautical chart. This new overlay is displayed in conjunction with a real-time forward-looking sonar overlay, and so allows crew to quickly see what lies ahead and what they’ve recently passed over. Displaying the survey as an overlay on top of the chart makes it easy for the bridge crew to visualize the vessel’s current position.

Overlaying the software with a 3D forward-looking sonar, which has a wide horizontal field-of-view ahead of the vessel, enhances obstacle avoidance even further. A single pass of the sonar with LHM can survey a much wider swath of the seafloor than with a standard echosounder. In addition, the large coverage zone from a single ping results in a huge overlapping area from one ping to the next. This means that crew will no longer have to worry about missing any obstacles between pings. Using this software and product combination, crew can build a 3D map of the seafloor over which they’ve recently sailed.

The software effectively provides a way for yachts store the data they have already gathered. It means boats can find their way in to unknown waters, do a quick survey of the area and store this information. They can then anchor in the safest place, and continually be aware of what is all around the vessel. Operators can orient the vessel relative to any features or obstructions found with the survey. If they drift, they will know if they are drifting toward hazards and can act before any harm occurs.

How to find it?

Local History Mapping™ is now a standard feature in FarSounder’s Forward Looking Multi-Beams. The company has invested heavily in the database infrastructure for storing and integrating large survey datasets, and has plans to add new features and capabilities to the mapping, based both on customer feedback and its product roadmap. For existing customers who wish to add Local History Mapping™ to systems, all you need to do is fill out a Software Update Request form to receive it. However, it is worth bearing in mind for those interested in adding the equipment that the initial installation must be done during drydock.

Constantly improving safety at sea can help minimize casualties, environmental damage, and costs across all sectors of the maritime economy. Forward-looking sonars able to display in real-time 3D are a valuable enhancement to improving safety at sea, but with LHM software saving this 3D data to further enhance awareness is a real possibility. And adopting this advanced technology on superyachts is the next logical step for those striving for ever-safer navigation.