Two-way radios – how to choose the right one for you… 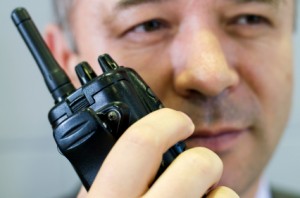 When the time comes for you to choose a new two-way radio system, whether you’re first time buyer, updating from an old model or hiring temporarily, the jargon can be overwhelming. It can sometimes feel as if providers are being deliberately confusing when describing those all-important features. Yet as a buyer, it is crucial to understand which features will fulfil your needs. To help you out, DCS Two Way Radio has collated and explained common terms used to describe two-way radio functions.

You will likely have an idea of your area of priority, and so our list is divided into four subheadings: Efficiency and Ease of Use; Fitting to your Environment; Safety; and Privacy/Security. Get reading, then get choosing!

Efficiency and Ease of Use

If you need to communicate with both analogue and digital radios, this feature allows the user to switch between modes whenever necessary.

Headsets with a VOX-compatible microphone will begin transmitting as soon as you start talking, removing the need to press the push-to-talk button. This means you can perform physical tasks whilst still communicating with other users, perfect for the extremely busy operator.

When a radio sends an audio message or alert, the user’s Caller ID is sent to all radios with a screen. This ID would likely be picked up and identified at the base station of a control room, as these also tend to have display screens. These IDs can consist of both letters and numbers, and can be altered by simply re-programming the radios.

As with on a mobile phone, the texting function is handy for sending details that might be difficult to remember just from hearing on an audio message, or that need to be kept for future reference. Available on some, though not all, digital radios.

This gives you the option of recording and keeping short audio messages that you receive, and the ability to record your own short message to send to multiple radio users at a time. If you don’t choose a radio with text messaging ability, this is a useful alternative.

Fitting to your Environment

A radio is given a 4-digit IP rating, which represents show well it will be able to stop solid particles such as dust or moisture getting into it. The rating you want depends on the type of environment you are going to be working in.

This feature means operators must check in at specific times throughout the day/night. An emergency warning is activated if the user does not check in within the allotted time frame.

This is beneficial for users in unsafe or raised areas. This setting can be programmed to detect movement or inactivity, as well as the angle of the radio. It alerts the operator to adjust the radio after a period of inactivity, or if the radio exceeds a certain angle. If they have fallen or are unconscious and so do not respond, the radio will send out an emergency signal to get help. This feature compliments the Lone Worker alert.

Even the smallest spark from an electrical device (such as a radio) can trigger an explosion if the operator is working in a dangerous location. Intrinsically safe radios are sealed tight to stop this.

The radio monitors its own connectivity and lets the user know when they move out of range. When the connection is restored, the user will be alerted again.

This means the operator only need push one button to trigger a call for assistance, so is a necessity if you think your team might have to send an immediate and urgent request for help. Radios with the Emergency Alert feature have either a dedicated “panic button” or another button that can be programmed to fulfil this.

If privacy is your priority, most digital radios have encryption built in. This means other radio operators cannot listen in to your communications, keeping any information you share secure.

This is an equivalent security feature available on analogue radios. The encryption scrambles the audio you send so that anyone listening in would not be able to understand it. However, with software now available for decoding these transmissions, it is not quite as secure as digital encryption.

Hopefully this has helped you understand what to ask for when next picking a two-way radio. However, for further advice why not give the DCS 2 Way Radio specialists a call on 0800 294 7766. They would love to advise you further about the best radio features for your needs, and models that might suit you.

Offering a free consultation and cost estimate, DCS ensure they can provide the right solution tailored for you.

With special thanks to DCS 2 Way Radio.